WHEN we bought our house we knew the kitchen was going to be a big job. It was located in what is traditionally known in a Victorian house as The Return. One of the main problems was the fact that there was a chimney in the centre of the room, see below, that was blocking all the light. Not only that but wires were coming out of the walls and the cabinets were in two different styles.

We decided to take a bit off the kitchen to make a downstairs toilet and we ripped the chimney out the whole way up. We were able to do this as we didn’t share a chimney with the next door neighbour. So no expensive RSJ was needed. Doing this gave us more room in the kitchen and bathroom upstairs. We now needed to add a window and in keeping with the traditional restoration we put in wooden sash frames. I also got the carpenter to make us a stable door. After all, I live in Dublin 8 – so the chances of a horse dropping by are probably marginally higher than other areas. Win Win. 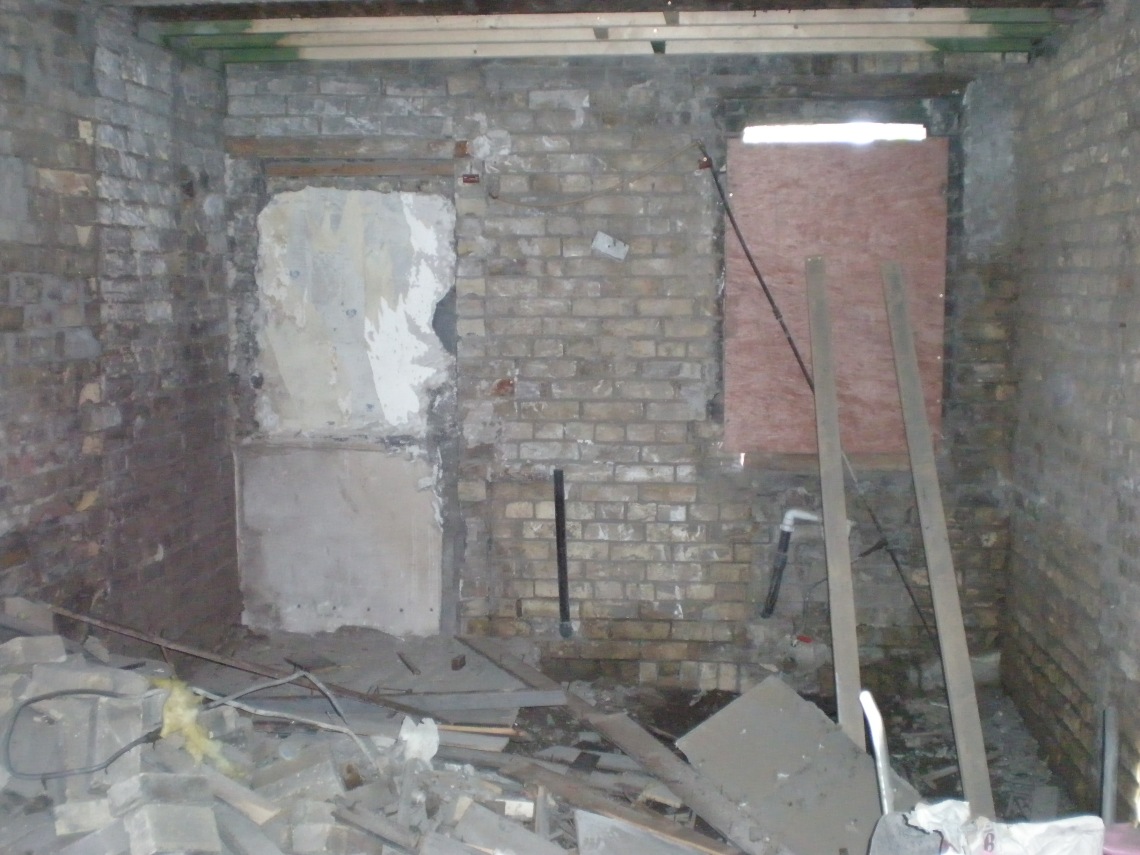 When I cycled down to the house during the restoration I was lucky to see the beautiful yellow Dolphin Barn brick work before it was plastered over. I called a halt and made the decision to keep the wall bare to add a New York Loft vibe. 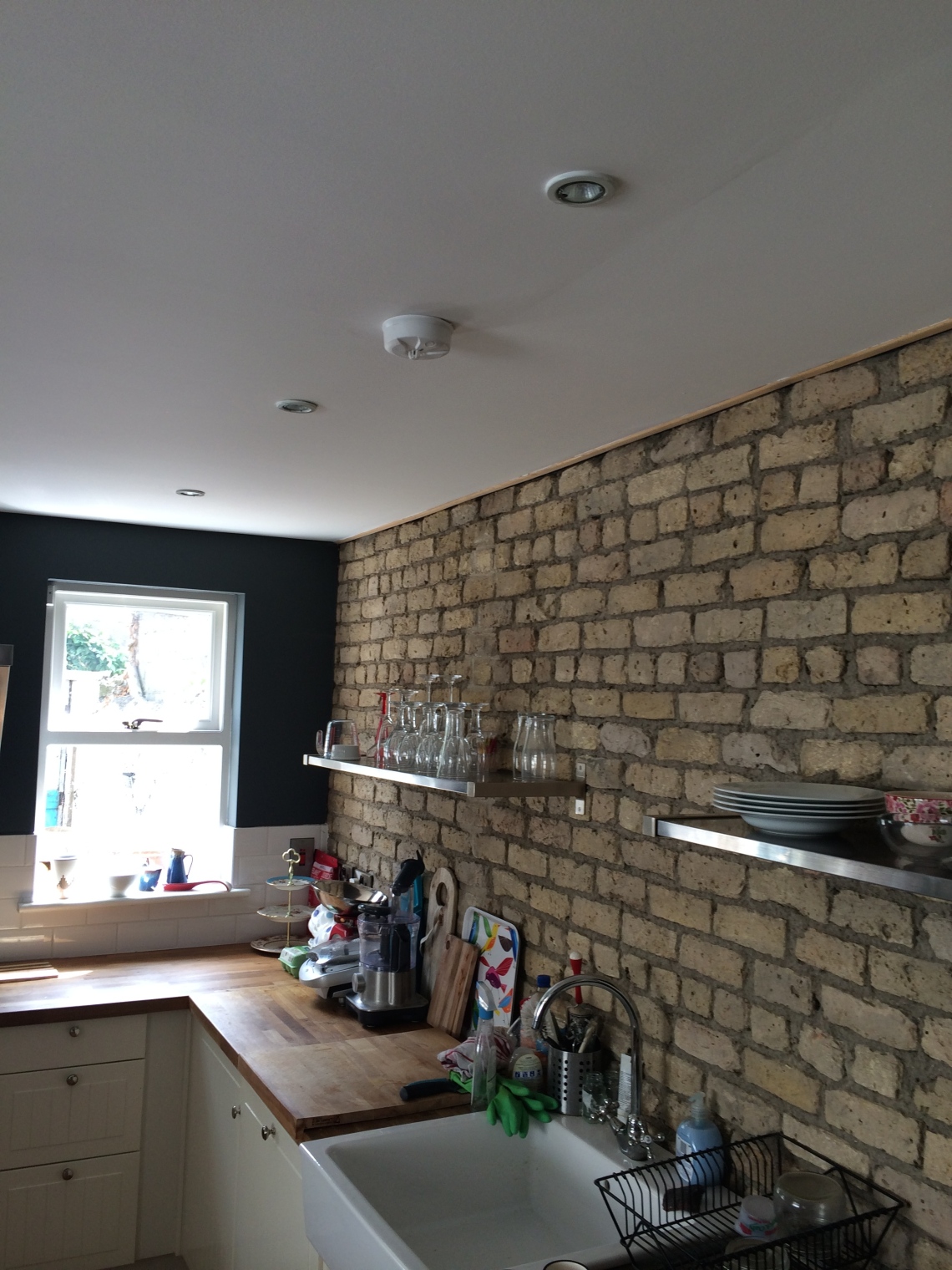 We got our presses, cooker, sink, fridge, dishwasher and washing machine from IKEA. They were doing a three-for-two deal on appliances at the time. (They tend to do this twice a year). We opted for plain cabinets to give us more options if we wanted to change the colour of the walls or tiles in the future. The colour is currently Downpipe from farrowandball.ie We also wanted a more open-plan feel so we decided on shelves instead of top presses.

I didn’t want white plug sockets and instead opted for the more expensive silver ones. We also used a vintage lock on the door and vintage knobs on the presses. 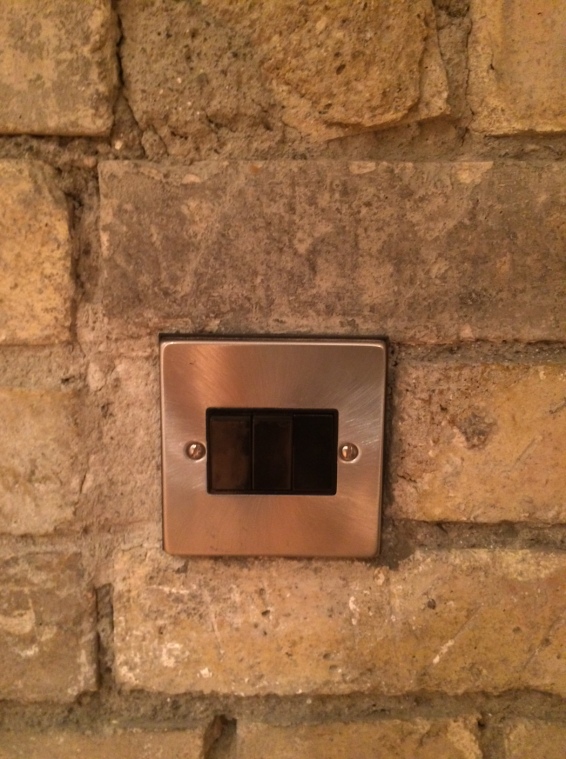 We wanted hanging lights for above the dining table. We found it hard at the time to actually pick the exact spot with the electrician as we had no idea what table we would have and therefore where it should hang down. We picked a string cord light so we could move them when required. We bought them online but similar ones can be bought from Industry.

We recently bought a new IKEA table and bench. We are trying to make the most of the space. It’s actually made a huge difference to the look of the room.

Our little drying station above was a must when Joseph arrived. We couldn’t get a vented one as it wasn’t on an outside wall. Despite the picture this one actually doesn’t look too bad.

Now having done all that we are currently thinking we should make better use of the space and are debating if we should knock through and creating a small extension on the side return. I’ll keep you posted. Below, is an example of the potential extension.