I HAD been told so many times by friends that when Joseph started in creche he would get sick.
I have to admit, I was a little cocky and was thinking that, seeing as he hadn’t had more than a runny nose in the 11 months before creche, perhaps I was the one that might make it a few months before that dreaded call.
Then, after settling in for a grand total of eight hours over a period of four days, he was sent home with his first ever temperature. Turned out he had picked up an ear and throat infection.
In week three, while driving to work and wondering why he was gurgling and screaming, I turned around to see the entire back seat of my car (and my baby) dripping in puke. Yay! He had caught the vomiting bug. Okay, I felt I could handle that. Grandparents and aunts were at the ready.

Week five, I sat at my desk and saw the number come up on my phone screen and thought: “This can’t be happening!” Maybe if I didn’t answer they would just handle it? I answered and I was called over to creche to look at a few suspect marks on his arm that might be either Chickenpox or Hand, Foot and Mouth. (The latter I thought was some disease you caught when you got too close to livestock. I’ve yet to learn what Slap Cheek is.) When I took a look, I have to admit I was thinking: “I’m being called for two spots on his arm!?” However, I took their word for it that something with my usually smiley baba was amiss. Another doctor trip and he confirmed that in his opinion it was the start of Chickenpox as Hand, Foot and Mouth (HFMD) would be on the soles of his feet (not just the tops), around his mouth and on the palms of his hands (not just the backs). “GREAT! I have ten days of organising alternative childcare.” Between myself and my husband and extended family we thought we could cover this.

To say Day Two of the ‘pox’ was bad would be an understatement. I never knew a baby could cry all night. I mean the type of crying that makes a parent weep as it’s just so sad. I tried everything to soothe my poor baba. I tried to play with him on the rug downstairs at 3am with his favourite toy, I offered him his favourite porridge at 4am, I tried to sing. Nothing would distract him from the pain. I just kept thinking: “How the hell do parents do this with more than one child?” This pox was making Joseph’s chances of having a future sibling less likely than a heartfelt apology from Donald Trump.

Day Three saw Joseph’s poor body covered in sores. I got a call in the office from Paddy – who luckily had already booked holidays – to say that Joseph wasn’t swallowing and was spitting out any drink that touched his lips. He was drooling so much that we ended up changing his clothes – and our own – several times. He’d rest his head on your shoulder for a few minutes and your top would be saturated. Granny was soon called to see if this was serious or normal. She felt he was holding down enough liquid. I also quickly called the doctor from my desk to double-check and they felt that the fact that he wasn’t listless and was crying a lot was a good sign that it was just Chickenpox.

I started feeding him smooth Stage One baby food so that he could slurp it down and not aggravate the sores all over his mouth. He never smiled and kept his lips firmly closed. His normally sweet breath smelt like a hardcore reveller’s dry mouth after a three-day festival.

It got easier after Day 3. We gave him nightly bread soda baths and slathered him in Poxyclin and calamine lotion. We were on the home stretch and starting to feel the end was in sight…or so we thought.

Six days after his diagnosis, I woke up with a bad sore throat and an upset stomach. We had snuck away to a really good friend’s wedding – locally, don’t hate me! – for a few hours, so we felt maybe I was just overtired from that. A few hours later, I complained that I felt so cold that I couldn’t get my bones to heat up. Hmmm. After a good night’s sleep, I started feeling ropey in work and slipped off to the doctors at lunchtime. The doc confirmed I had strep throat and was to stay at home for a week. I thought she was overreacting and told work I was taking a half day.

That night I started hallucinating in bed and itching my hands, which felt like they were burning up. I made a quick call the next morning to the doctor, who told me it was just my strep infection spreading to my hands and to not go in to work. My hand was covered in blisters and I felt something wasn’t right so I got a second opinion locally. The local doctor took a look at my hand and said she had no idea what it was and asked another doctor, who shook her head. I told her that Joseph had Chickenpox but that Hand, Foot and Mouth was going around. She looked up Joseph’s charts and said no, that he definitely had Chickenpox. I left the doctor being told to take an antihistamine.

By 4pm, my hands had started to feel like they were on fire. I knew it had to be something more than strep. I called the second doctor back but was told there was nothing she could do and “that you have now had three opinions” so I just had to wait it out. Three opinions – two of which were “I don’t know what’s wrong”. Grrrr!

That night was horrendous. At 3am I sat on the stairs in my mom’s house – where I was staying with Joseph for help as Paddy was now back in work – and started to weep. I thought I was either going mad because my hands felt like they’d been forced into a deep fat fryer…but the doctors were telling me there was nothing significantly wrong with me. My sisters, who had stayed overnight to help me out with the baba, were starting to look worried as I’m not a crier. The pain was all consuming.

There have only been two times in my life when I have been glad I listened to my body in the face of seeming indifference from medical professionals. The first time was when I was actually in full-blown labour with constant contractions but was told it was just “very early labour” … two hours later I had a baby in my arms. Like that time, I knew something wasn’t right and being fobbed off with “it’s a strep rash” or “just take an antihistamine as you must have eaten something” wasn’t cutting it. I called my original doctor and said I’m coming back in – even though the receptionist was hoping I would just have a quick word on the phone with the doctor. Within a second of my doctor looking at me, she said: “Are you sure Joseph has Chickenpox?” and I said no, that I thought he had HFMD, but that no one was confirming this.  I showed her a picture and she noticed he hadn’t any marks on his tummy or on his feet. She said all you need is to have it in one of the three areas – he had it around his mouth and in his mouth. A big sign was the fact that he couldn’t swallow because of all the sores.

I turned out that I too had HFMD, and the worst case of it the doctor had ever seen. She also said that adults really shouldn’t get it and that I must have been terribly run down to pick it up. To be honest, I never really felt run down. Tired, yes, but I was back at work and running after a crawling monster. I was almost ecstatic as I felt I had finally been listened to and that I was going to get some proper pain medication. Over the next few days I slept and slept. My hands looked awful but the sting was fading. I bought white cotton gloves – which made me look like an overly dedicated French mime artist – from the chemist to try to keep the contagiousness at bay and they were really useful when the peeling started. It’s passed on by close contact (talking close together), saliva and from not washing your hands properly after the toilet or changing nappies. 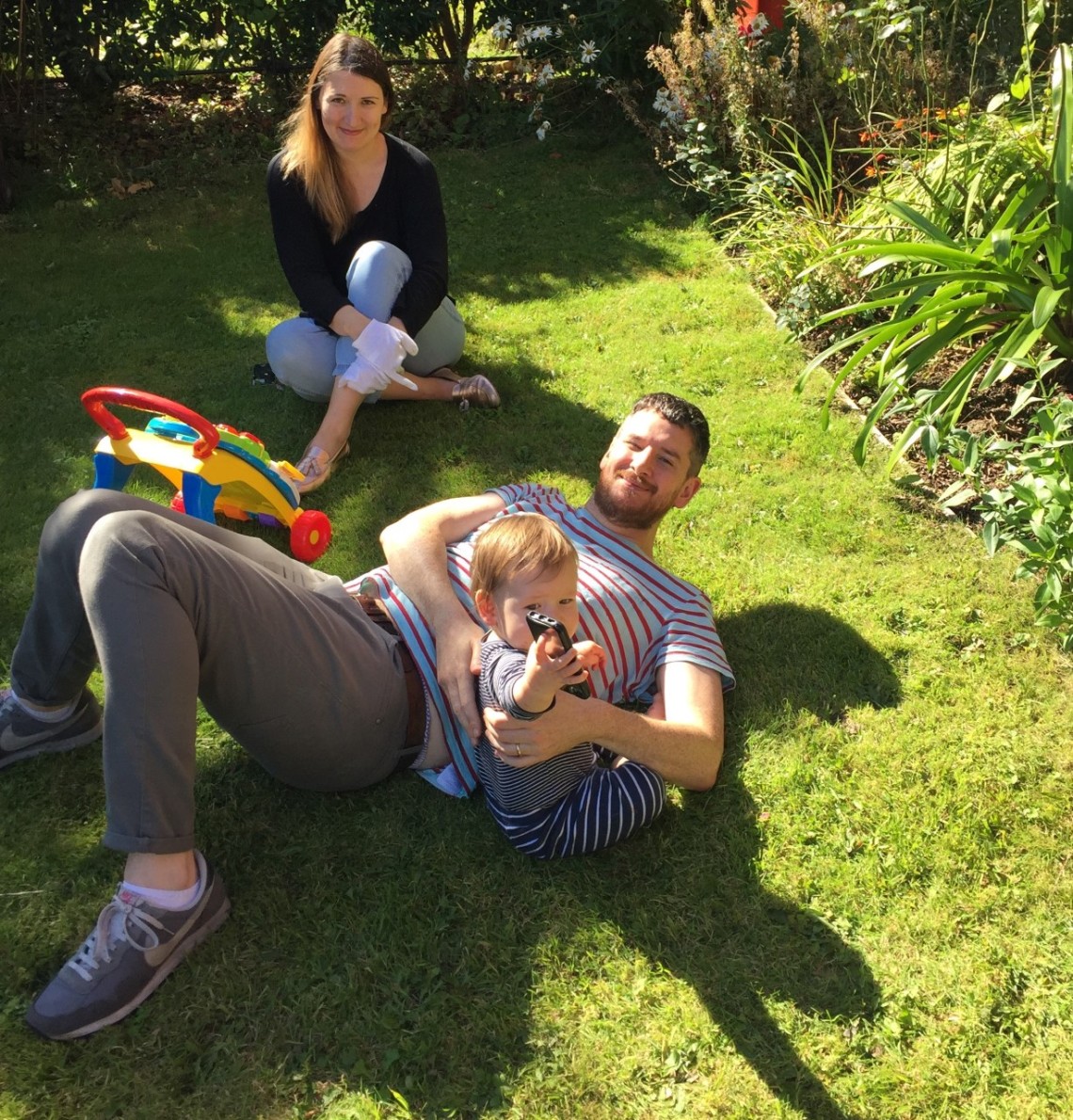 I was given a doctor’s note for two weeks but felt OK to go back to work after ten days. The infected skin has all peeled off and my hands just look a bit odd with lots of blotches on them.

I tend to hate reading these kind of posts about people being sick as I generally prefer to just hide away and get myself better. I just felt that when I was looking for more info on HFMD I was only seeing information about a child getting it and not an adult, so I hope this article is useful for anyone who winds up getting it. Also, it’s very easy to diagnose HFMD as Chickenpox as they look very similar, so this piece may well help someone in the same boat as I was in… or at least stop them spreading it.

*This informative but rather serious piece also explains why I haven’t been posting in the last two weeks. Back to the usual lifestyle-y stuff next week.