I used to love the restaurant Eden in Dublin’s Meeting House Square and really missed it when it closed. Eden Bar and Grill, which is located on South William Street, is a stripped-down, casual-dining reinvention of the previous restaurant. I have to admit that despite it being open a few years now it was never really on my radar. However, having a newborn baby opens your eyes to a whole new world. When thinking of going for brunch with a new baba you have to be practical and think of things like: are there steps to the front door, is there room at the table for a buggy and, above all, do they have friendly staff that don’t look at you as if you are about to bring the tone of the restaurant down with your gurgling baba?

So I have been for brunch on numerous occasions in the last few months with the screeching baba at Eden Bar & Grill. I would highly recommend the Salmon & Caper Fishcakes with poached egg, dill hollandaise and hash browns. Although I think you need to share a side of chips as it’s not hash browns as you know it, more like a few little cubes of potatoes. It may sound obvious but the fish cakes are filled with actual fish unlike some restaurants that serve them more like potato cakes. I have also tried the steak and eggs, which are hearty and set you up for the rest of the day. 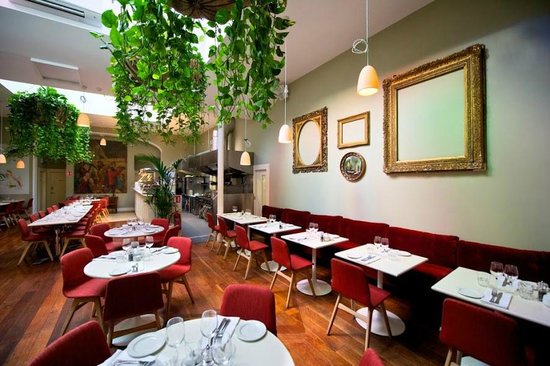 On a recent Saturday night we found ourselves in town and thought we could just walk in to a restaurant without a booking. We didn’t realise that in the last five months – in which time we have been a little lax on the dining scene – the boom is back. We found ourselves on South William Street wondering where was left to try for a table and I suddenly remembered Eden Bar & Grill. We were lucky they had a table and we were happy to wait at the bar before one came available. On looking around the room I couldn’t believe my eyes – there were about 80 women – no joke, and about six men in the whole restaurant. On saying my observation to my exhausted waiter he said: “I know, it’s an absolute nightmare.” The restaurant was a little packed so if I am honest service wasn’t great. This was not our waiter’s fault but merely that the staff were run off their feet. We didn’t mind as we were getting dinner served to us rather than eating with one hand and holding a soother in the other.

I ordered Duck Liver Parfait with smoked almond and bacon, date puree and toasted brioche. The parfait was perfectly smooth, and the date puree gave it a lovely kick. Even my husband who usually can’t stand parfaits decided to try it and he enjoyed it. The only problem I had was that the starters took ages to come out and we had devoured the bread on the table as well as nearly a bottle of wine (Malbec – nice and smooth) so I was pretty full. My husband had the potted crab, which tasted fresh and light, and if I was to choose again that would be my preferred choice. For mains, I chose the Chargrilled 10oz Striploin. It wasn’t cooked enough for my liking (I am a ‘well-done’ freak) but overall it was a grand steak and chips… which is usually pretty hard to mess up. My date, who normally can’t resist a steak, decided to try the Duck Breast with potato dauphinoise, caramelized apple and baby carrot and sweet Marsala jus. He loved it – the meat was tender and juicy, something not always guaranteed when you order duck in Dublin.

Usually we have room for dessert but because we scoffed a loaf of bread while waiting for our food we had to be rolled out of the place.  The cheque came to €105.50, which is steep enough for two courses plus wine. If it’s better value you are after, you can’t beat their early bird menu from which two courses will only set you back €22.50.